In the south west of the province, near the Myanmar and Laos borders. A post was opened in 1897 as the result of a Sino-French convention of 1895 to serve the trade between Yunnan and Laos in Indo-China, but the scope was limited and the Post was closed in 1901, before any permanent accommodation arrangements had been considered.

Far into the south west corner of the province, close to the Burmese border, and a six week journey from Shanghai. The opening of a consulate here in 1899 stemmed from an Anglo-Chinese convention of 1894 about Burma. The consul lived at first in a tumbledown granary and then in an old yamen: half the costs of running the consulate were met by the Indian government. Boyce recorded in 1899 that it would be difficult and expensive to build. A site for a new consulate was acquired in J Pao Street, outside the East/West [???] Gate and close to a site for the Customs, in 1903, an adjacent site in 1904, and eight further plots were bought freehold in 1910 from various owners for £350. Thus was a site of about 9½ acres consolidated for eventual consulate buildings. Activity, however, remained at a low level and it was not until the 1920s that construction started on consular buildings, which were completed in 1930. They were badly damaged during the war and abandoned in 1942. The Post did not re-open after the war, ownership was allowed to lapse and the property was written off in 1961. [Building has recently been restored?]

In the centre of the province. Post opened in 1902 and a freehold site of about four acres for a consulate was pieced together from about 30 lots between 1904 and 1908. It lay beside the lake three miles north of the North Gate, and was variously called the ‘old camp’ and ‘British garden’ by the’ lotus pool’. A new consul-general in 1912, however, decided that the location was wrong because the rail terminus that was expected to be north of the old city was instead built to the south, whither the business community and the focus of the consul’s work also drifted. A south site was identified immediately after the First World War but the idea of an exchange fell through, and the 1920s passed without a resolution. A proposal to build a wall around the northern site so as to keep soldiers and other trespassers out was turned down by the Treasury. The Post closed in 1951, having never escaped its leased premises. The Chinese blocked disposal action and ownership of the site was allowed to lapse in the 1960s. 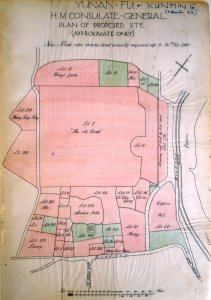