The embassy was initially housed in the early 1990s in the Intourist Hotel. The building at Ul. Gulyamova 67 was taken on lease for 49 years in 1995, with a 50% reduction in rent for 15 years to recover the costs of the ingoing and conversion works to offices and a residence for the ambassador. The local architects were BSB and SKF, and the contractor was Chambon, of Paris. The project was completed in 1996 and opened by the Prince of Wales in November of that year. 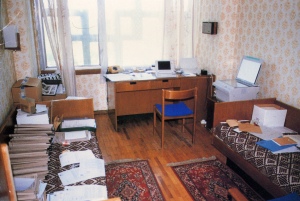 The ambassador’s office in the Intourist Hotel, 1995.