Sudan was ruled as an Anglo-Egyptian condominium from 1899 until it became a sovereign independent republic in 1956. Offices for the new embassy, which was preceded by a trade commission, were originally leased in the Aboulela Building on Barlaman Avenue.

A 0.57 hectare freehold site on Sharia Othman Digna (formerly Cromer Avenue), Plot No 1, Block 9D East, on which to build a residence was bought in 1958 from Mitchell Cotts for £51,000. The house was designed by a Ministry of Works architect, James Truscott, and was completed in 1961 at a cost of £102,000. It is a three-storey building, centrally air conditioned, with reception rooms on the first floor and 6 bedrooms on the second. Improvements were made to it in 1978. [Update] 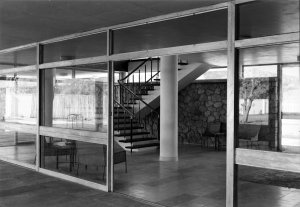 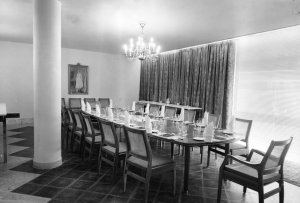 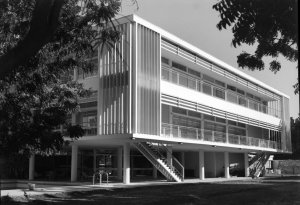 By the late 1970s, new purpose-built offices were required. The site at the end of the residence garden was just large enough for the purpose. The new building was designed in-house by John Watts and was completed in January 1985 at a cost of about £4.5 million. It contains about 2,500m2 on three floors of offices above a semi-basement containing carparking, storage, workshop and plantroom: the building was fully air-conditioned. The architectural form derives from the idea of carving shaded exterior and concourse spaces from a block of local bricks. The plan is almost square, with cellular offices arranged around a full-height central octagon: the interior is quiet, with low light levels from slit windows.

The contractor was Mowlem International. Three tapestries of English landscapes by Susan Spooner (Cornish Garden), Alec Pearson (East Anglian Landscape)  and John Gaastra (York Minster) hang in the central hall: the coat of arms in ironwork was by Richard Quinnell.

Siteplan, with offices at left and residence at right, 1981. 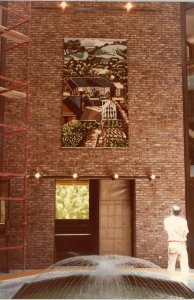 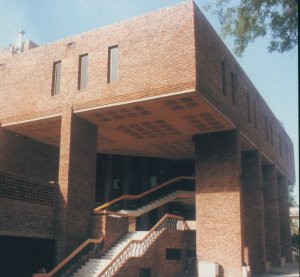 Entrance towards atrium on first floor, 1985. 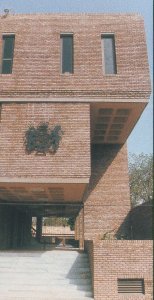 Royal coat of arms above entrance, 1985.