Harbin was the Russian headquarters of the Chinese Eastern Railway, and they were building a modern European city next to the old Chinese town. A consulate was established in 1910 to keep up with the Russians. Three contiguous pieces of land, comprising 1¾ acres, at Lots 72-74 Voksalny Prospekt, in New Town Harbour, were leased in 1920 from the Chinese Eastern Railway for 63 years, so as to be co-terminous with a head lease. A three-floor consulate-general, with offices on the ground floor and residential accommodation above, was not completed on this site until 1930. The Japanese took over Manchuria the following year, and the Post was closed when war was declared with Japan. It never re-opened. The property reverted to use as the headquarters of the Chinese Chan Chung Railway. 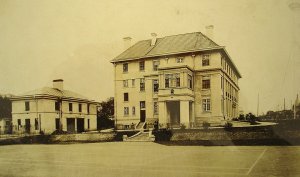