Cyprus was ceded to Britain for administrative purposes by the Turks in 1878 and annexed by Britain in 1914. It became a Crown Colony in 1925 and an independent state in 1960, when Britain established a high commission in Nicosia. Turkey invaded the island in 1974 and proclaimed a Turkish Cypriot Federated State in the northern part of the island, which became in 1983 the (unrecognised, except by Turkey) Turkish Republic of Northern Cyprus. Since 1974 the island’s Greek and Turkish communities have been separated by the so-called Green Line which runs through the capital, Nicosia.

A prominent house at 29 Mehmet Akif Street (formerly Shakespeare Avenue) was bought as the residence by the Ministry of Works in 1960 for £65,000 from Byron Pavlides, a local entrepreneur who had given the Governor a two month option on his house. It was built in 1937 by a wealthy British resident called [?] Gunners and designed by a [?] Cypriot architect in what the Ministry of Works surveyor described as a Venetian-cum-Byzantine style. The Ministry architects hated the house and the Permanent Secretary annotated ‘What a frightful house. I only hope we didn’t allow ourselves to be bullied too easily into buying it.’ Three small adjoining plots were bought at the same time to create more space for a circular drive and parking, and two more in 1964 to guard against intrusive development: the whole site amounted to about 4½ acres.

When the Turkish enclave was defined by the Green Line in 1964, the residence became inaccessible to Greek Cypriots. The high commissioner therefore moved out of the residence in late 1972 and into a house at 6 Philhellenon Street (the Chief of Staff’s residence in colonial days) that had been bought from the Public Works Department for £17,000 in 1961 for the counsellor. This house was enlarged in 1973 to make it more suitable for an interim residence and an adjacent freehold house, formerly occupied by a first secretary, subsequently became a residence guest annex and the two gardens were re-landscaped to suit. It remains the residence, while its predecessor is retained under care and maintenance [?is this right] and is occasionally used [for what?].

At independence, a one-hectare compound on Alexander Pallis Street (formerly Tennyson Street), about 400 metres from the then-residence, was leased from the Public Works Department. It contained four buildings: the main one, a T-shaped, three storey block of six flats built in 1954, became the chancery; and three small free-standing stone buildings housed different sections of the high commission. In 1992 the opportunity arose for a political deal under which the Cypriot government would at last gain title to the British Military Hospital site in Nicosia, where it intended building a new university, in exchange for the Foreign Office acquiring the freehold of the high commission office compound. In consequence, the Foreign Office paid £365,000 to the Cypriot Government and £98,000 to the Ministry of Defence to acquire the office compound. 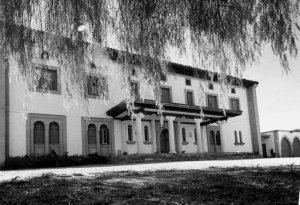 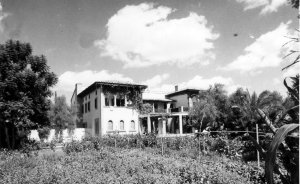 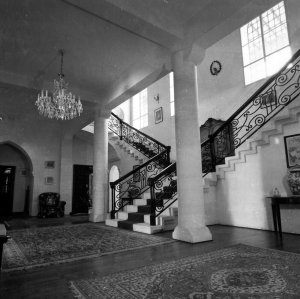 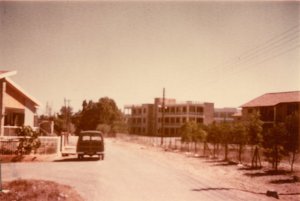 Block of six flats to be converted to offices, 1959.