Boma, on the north bank of the Congo River about fifty miles from its mouth, was the capital from 1886 until the mid-1920s. The capital then moved to Kinshasa (called Leopoldville until 1966), which lies on the south bank of the Congo River (immediately opposite Brazzaville on the north bank), about 300 miles from its mouth and just upstream of the non-navigable stretch of the river. The British consulate moved from Boma to Kinshasa in 1930.

Lubumbashi (formerly Elizabethville) is the capital of Katanga, in the south-east corner of Congo. Kisangani  (former Stanleyville) lies on the north bank of the Congo River over a thousand navigable miles upstream of Kinshasa.

A site for a vice-consulate, in what was then called Leopoldville, was granted in 1906 to the British government by the Congo government, but title was never transferred. A consular house was built here in 1907-9 for £5,900 with materials sent from Britain in accordance with drawings prepared by Robert Neill and Sons. The superintendent of works was Archibald Neil Campbell. This building was sublet to the Congo government in 1923 and sold to Chantiers Naval et Industrial du Congo (CHANIC) in 1930. It remains in that company’s possession, and has been handsomely elaborated to serve as the Chairman’s residence in Kinshasa.

In 1931 the colonial government ceded two pieces of land to the British government to assist it in establishing a larger consulate in the new capital: a small plot for a consular office on Avenue Baron van Eetvelde and a larger one, on Avenue de la Racquette beside the river in Kalina, for the residence.

The intended office site proved unsuitable and was exchanged for another further east in 1934. This new site served no better and was returned to the colonial government in 1944 in exchange for an assurance of the offer of yet another site when the British government needed one. Such a need was foreseen in the early 1950s, when the lease of temporary consular offices was shortly to expire: a site of 1,224 square metres, known as Plot 651 on the corner of Avenues Felix Fuchs and des Aviateurs, was accordingly granted in expectation of the erection within 5 years of consular offices with flats. Design work was spasmodic and, although by 1977 tenders for a building had been received, nothing was built on Plot 651 and it was sold in 1982. Meanwhile, offices had been leased successively at 9 Avenue Beernaert and in the Barclays Bank Building at 191 Avenue de l’Equateur.

The Racquette site lay vacant for several decades, during which residences were leased. The site was slightly enlarged in 1949 to an area of 1.06 hectares as a result of the realignment of Ave Maurice Lippens. In 1963, a single storey residence was bought adjacent to the north boundary of the Racquette site with the intention of its being a temporary residence until a new one could be built next door. After improvements to this residence had been made, however, it was found fit for long term retention, and remains the residence today [check].

Three Arcon prefabricated bungalows, originally destined for Ascension Island, were erected on the Racquette site in the mid-1960s for staff accommodation, and a community hall and amenities were also built there. Planning for long overdue rationalisation of this site was put in hand in 1983, and new embassy offices and four staff houses, designed by Michael Pugsley, an OED in-house architect in association with Albert Interproject, were completed in 1991. The offices thus moved into their first permanent building in Kinshasa sixty years after a site for them had first been provided. 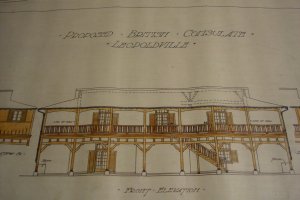 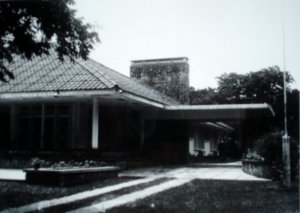 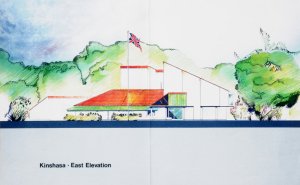 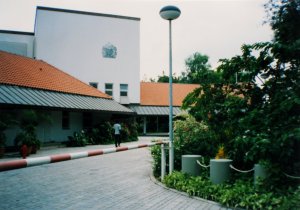 A consulate site of 34 acres, triangular with its base along the shore of the river, was bought in 1902 for £700. A three room prefabricated timber-framed bungalow, by Messrs R. Rogers and Co. was sent from Britain in 1903 for erection on concrete stilts (which provided an open lower floor). An employee, Alex Robertson, of the makers was sent as foreman carpenter and clerk of works to supervise construction. The site selected was on the fifty foot contour, and the cost was £3,400. A landing stage and a shelter for the consulate’s river launch were built at the river’s edge.

Although Boma ceased to be the capital of the Belgian Congo in the mid-1920s, the work of the consulate was not transferred to Leopoldville/Kinshasa until 1930. The Boma building was then sublet on and off until 1935, when it was sold to a local Belgian resident.

Approach to consulate from Congo river, 1930. 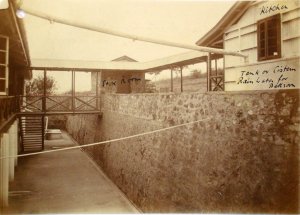 A site of about half an acre was granted by the Congo government in 1906 and, identically and concurrently with Leopoldville, a building sent from Britain was erected in 1907-9 at a cost of about £6,500, by the same superintendent of works, Archibald Neil Campbell. The Post closed in 1916 and the house was sublet to the United Africa Company Limited until sold to it for £700 in 1933.

A site, Plot 52a Boulevarde Elizabeth, was leased in 1912, and the building on it adapted for use as a vice-consulate, at a total cost of about £1,200 plus a small annual ground rent. It was a poor acquisition, made by the vice-consul, Gerald Campbell, whom the Treasury repaid. A small compound for the vice-consulate’s native staff was bought nearby in 1916, and new buildings built there in 1931. In 1919, the site next door to the vice-consulate, at the corner of Boulevards Elizabeth and d’Etoile, was bought from Tanganyika Concessions Limited, and a new residence built on it in 1920, to the design of Thrift Reavell in London, at a total cost of about £8,000. Neither was this a satisfactory acquisition because the local architect/contractor, Brown, reduced the overall dimensions of Reavell’s design by up to 20%. Subsequent consuls therefore found it too small. [?later]

Siteplan of residence and offices, 1920.