Search for a residence

The first British high commissioner to New Zealand, Sir Harry Batterbee, arrived in Wellington in 1939. A search had already been conducted for a suitable site on which to build a residence. One of the sites discarded was called Homewood, in Karori to the west of Wellington, where the house could be demolished and a more modern one built in its place. But the gardens had recently been so splendidly laid out that the high commission staff, assuming that the property would be more of an upkeep liability than an asset to the British government, lost interest. Meanwhile, a six month lease was taken on a recently completed modern house, Ranelagh at 1A Wesley Crescent, which was owned by Theo Kelly and designed by R.G. Talboys and Associates. Because Ranelagh was on the small side, despite a splendid recreation room and roof terrace on the second floor, a flat in the adjacent house, Airlie at 5 Clermont Terrace, was also leased for domestic staff accommodation. The lease on Ranelagh was extended several times during the Second World War to March 1944, when the (by now) Ministry of Works decided not to renew it again. Kelly therefore sold the house and the next high commissioner to arrive, Patrick Duff in 1945, had ignominiously to move into the house formerly leased by the official secretary.

Duff had been private secretary to prime ministers for ten years before succeeding Sir Lionel Earle in 1933 as Secretary at the Office of Works, where he stayed until moving to Ottawa as deputy high commissioner in 1941. He therefore considered himself well equipped to resolve his housing problem in Wellington. In September 1945, he learned that the new owner of Ranelagh was preparing to sell it to either the Russian or French ministers. Duff recommended to the Ministry of Works, his former department, that Ranelagh should be bought on the basis that it could be occupied by the official secretary once a new residence had been built. The ministry was unpersuaded by the case for purchase but authorised leasing both Ranelagh and Airlie for another five years, to 1950. Soon after, Airlie became available for purchase and, because Ranelagh needed Airlie, the ministry took out an option to buy Ranelagh. Meanwhile, Duff had found a six acre site on Mount Victoria, a hill on the east side of Wellington, which he recommended for purchase with a view then to selling half of it on to the Municipality. The Treasury agreed and in July 1947 authorised buying all three properties – the Mount Victoria site, Ranelagh and Airlie. This was done. ‘I have not been Head of His Majesty’s Office of Works for a number of years myself for nothing’, Duff  boasted. A year later, a senior architect in the ministry, Douglas Alexander, visited from London to progress the planning of a new residence on the Mount Victoria site. He wrote to his superintending architect, Richard Turner,

‘I had the unpleasant duty of telling [Duff] that I could not recommend building on the site we bought following his recommendations. It is right on the crest of a ridge and gets 100% of all the winds that blow. Wellington is known as “Windy Wellington” and lives up to its name in no uncertain manner. 80-90 mph winds are quite frequent and you have no idea of the row they kick up. The High Commissioner has taken it very well and I hope to agree alternative proposals before I leave on Thursday’.

Turner could not resist the self-righteous urge ‘… it does surely illustrate how unwise it is for us to purchase buildings or sites without their having previously been vetted by an Architect who is fully conversant with the requirements’. All agreed in 1949 that the site selected by Duff should be sold, but the Wellington City Council and the Fire Services Training Hostel both turned it down, and it was still on the market in 1953 when the Treasury rued ‘It is surprising that Sir Patrick Duff, one-time Permanent Secretary of your Ministry, should have led you into this purchase. However, I agree that there is no alternative but to get rid of it as you suggest, even if … there is a loss on the transaction’. Ranelagh plus Airlie was going to have to suffice as the residence for a while longer. Its dining room was extended in 1950, and the ground leases from the Wellington Methodist Charitable and Education Endowment Board were extended for 21 years from 1953.

High commissioners put up with the limitations of Ranelagh until 1957, when Lord Home, as Secretary of State for Commonwealth Relations, put his weight behind finding something substantially better. The resultant search alighted on Homewood, rejected eighteen years earlier as a building site but back again on the market, and the house being by now considered more suitable for occupation than demolition. The high commissioner, Sir George Mallaby, considered it ideal and the property, rather over three acres, was bought for £45,000 in 1958. Mallaby was right: this ample, relaxed timber mansion has served well as a residence ever since. The vacated Ranelagh remained in the estate as the DHC’s house until the 1980s.

Homewood’s history goes back to the birth of Wellington. The 118 acre Section No. 35 in Karori District, an upland valley uninhabited by Maoris just east of Wellington, was the plot drawn by an Alfred Ludlam as his share in the New Zealand Company. He sold it on, untouched, in 1844 to the first judge to be appointed to Wellington, Mr Justice Henry Chapman. Chapman cleared several acres of the bush for fruit and vegetable growing and in 1848 built a large and solid timber cottage near the centre of the section, which he called Homewood. He sold it in 1852, when he left to take up an appointment in Tasmania, to John Johnston, the founder of a successful import business. Johnston and his family, including his son Charles who became Mayor of Wellington, lived at Homewood until 1925. The Johnstons sold some of the land and in1902 commissioned the architect Joshua Charlesworth, a Yorkshireman who had just won the competition to design the Town Hall, to rebuild Homewood. His builder was Frederick Hunt, and it was all completed in early 1904.

Charlesworth incorporated the rear part of Chapman’s cottage as the rear wing of his new design. The new part was an agreeable but rather chaotic composition of colonial baronial descent, with a portico, a three storey square tower above the hall, four large reception rooms giving off a half-panelled staircase hall, crenellated balconies and turrets, lots of bedrooms and all clad in timber painted dark brown, with a red corrugated iron roof. When the house came too much for Charles Johnston’s widow, she sold it in 1925 to a building contractor called Pulley, who lost no time in selling all the land except the house and its garden in lots for development. He sold Homewood itself to Benjamin Sutherland, a wealthy self-made man who, with his wife Lucy, invested heavily in the garden, importing tons of rocks to create the ferneries, and building the swimming pool and changing rooms in 1930. He made a ballroom out of the three bedrooms above the dining room, and he painted the exterior battleship grey.

It was from the widowed Lucy Sutherland that the Ministry of Works bought Homewood in 1958. The property had been one of the centrepieces of Wellington’s social and community life for most of the previous century, and the prospect of that continuing appealed to the Sutherland family. The ministry simplified the gardens to save on running costs, and painted the house white, which improved it enormously. The ballroom reverted to bedrooms in 1961 when the Cumming-Bruces’ burgeoning young family needed separate rooms. In 1990, the New Zealand Historic Places Trust gave Homewood an ‘A’ classification under the Historic Places Act of 1980.

During the Second World War, the offices were in leased premises, renewable annually, in the New Zealand Government Life Insurance Buildings. From 1972 until 1992 they were on the 9th and 10th floors of the new Reserve Bank Building, the lease of which the Bank was not prepared to extend beyond 1992. OED therefore bought in 1986 a freehold site on which to build new offices (including for the British Council) in Hill Street, close to Parliament and Government Departments, from the Catholic Archdiocese. Structon Group, a multi-disciplinary Wellington practice, was commissioned for designs, which were required to take account of local pressures for a domestic and residential feel in keeping with the locality: Ross Brown was the architect and Stephen Whittle the leader of the OED team. McKee Fehl Constructors Ltd was awarded the contract, which ran from February 1990 until October 1991. Various of the construction materials were from the UK: bricks from Kent, slates from Wales and granite from Scotland. The Post took occupation of the building two months later.

Smedley, Beryl, Homewood and its Families: a Story of Wellington, Wellington: Mallinson Rendel, 1980 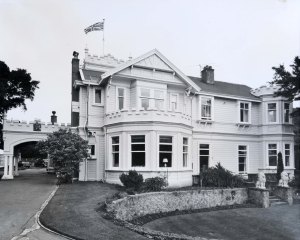 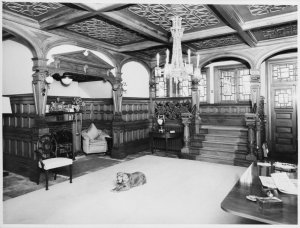 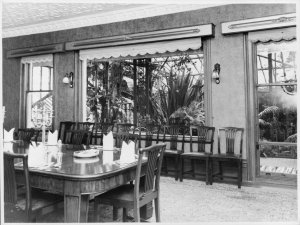 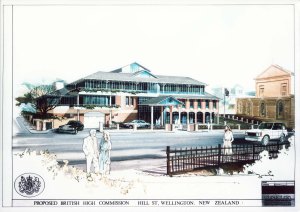 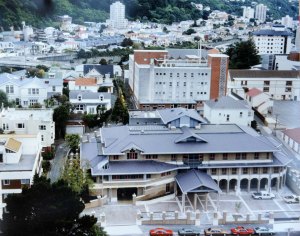