A river port on the Yangtze, about 50 miles upstream from Nanking, opened to trade as a result of the 1876 Chefoo Convention. A lease in perpetuity was taken on a two acre site for a consulate on a low hill a little away from the river bank in 1886. Here a two-storey consul’s residence with offices and constable’s quarter with gaol were designed by Marshall (and adjusted by Boyce, in London) and completed in 1887. The Post closed in 1922 and the property was let to the Chinese Salt Administration until 1934, when it was sold to the Catholic Mission. 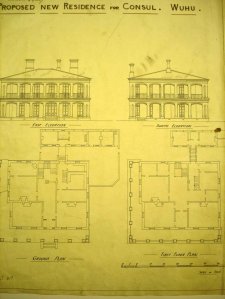