Shanghai was designated a treaty port by the 1942 Treaty of Nanking and a consulate was established in 1843.The first British consul, Capt. George Balfour, quickly laid out the infrastructure that became the Concession area for development by the trading companies. Later, in 1846, Balfour leased from the Chinese government about 15 acres for a consulate between the north end of the foreign settlement and Soochow Creek. A consul’s house, comprising both residence and consulate offices, was completed on this site in 1849, designed and built under the direction of Rutherford Alcock, the consul, and George Cleverly, the surveyor-general at Hong Kong. This house was shortly followed by two houses for vice-consuls and a small gaol in the far south-west corner. James Bruce, 8th Earl of Elgin and High Commissioner to China at the time, wrote of the consul’s residence in March 1858 ‘… a very spacious mansion. The climate, character of the rooms etc. make me feel in Europe again’.

About a half of the consulate grounds was sold at public auction in 1862 in nine lots by Harry Parkes, then the consul, without informing London, under a clause in Foreign Office regulations that allowed a 10% commission on such sales: about eight acres were retained. Parkes also granted the Admiralty the use of an area in the south-west corner of the compound. Whitfield and Kingsmill, an architectural firm practicing in Shanghai, prepared drawings for a building to house four quarters for assistants and interpreters, but it was never executed.

In 1865, a Supreme Court for China was established in Shanghai, where 4,000 Britons were by then recorded as living, to obviate cases being sent to Hong Kong for trial. Maj. William Crossman, the newly arrived Royal Engineer sent by the Treasury in London to bring order to consular building developments in China, proposed meeting the requirement for a large new courtroom by building it as an extension to the west side of the 1849 consul’s house. The project also involved the consul moving into one of the vice-consul houses until a new residence could be built for him, and his former residence being adapted internally to accommodate the offices of both the consulate and the Supreme Court. This major project was completed in 1869, and was immediately followed by the start of construction of a replacement consul’s residence at the north corner of the compound, close to one of the original vice-consul houses (which would be demolished). Concurrently, Robert Boyce (Crossman’s successor) started construction of a terrace of four houses along the south side of the compound on Peking Road (the Navy having vacated this site).

On 23 December 1870, a little over a year after its completion, the combined consulate/Supreme Court building was destroyed by fire. The staff moved first into temporary rented accommodation off-compound and then into temporary offices and courtroom built by Boyce on-compound. The new consul’s residence, at an advanced stage of construction, escaped the fire and was first occupied in 1871.

There was a long argument about whether to rebuild the combined building (as Boyce and the judge argued) or to build a separate new Supreme Court and combine the residence and consular offices in a separate new consular building (as the minister in Peking and the acting consul argued). London came down on Boyce’s side, not least because it would be significantly cheaper to re-use the existing foundations. The rebuilding of the combined offices and Court was completed in 1873.

The consulate grounds, with area retained after 1862 sale shaded pink, 1865.

Plan of the compound, 1867, showing land sold in brown, and used by Navy in green. Consul’s house in the centre with vice-consul houses on either side. Yellow denotes planned construction. (North to the right.) 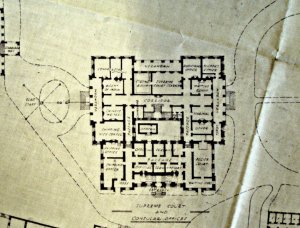 Ground floor plan of main building, after addition of two courts on the south side, 1913. 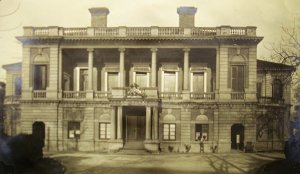 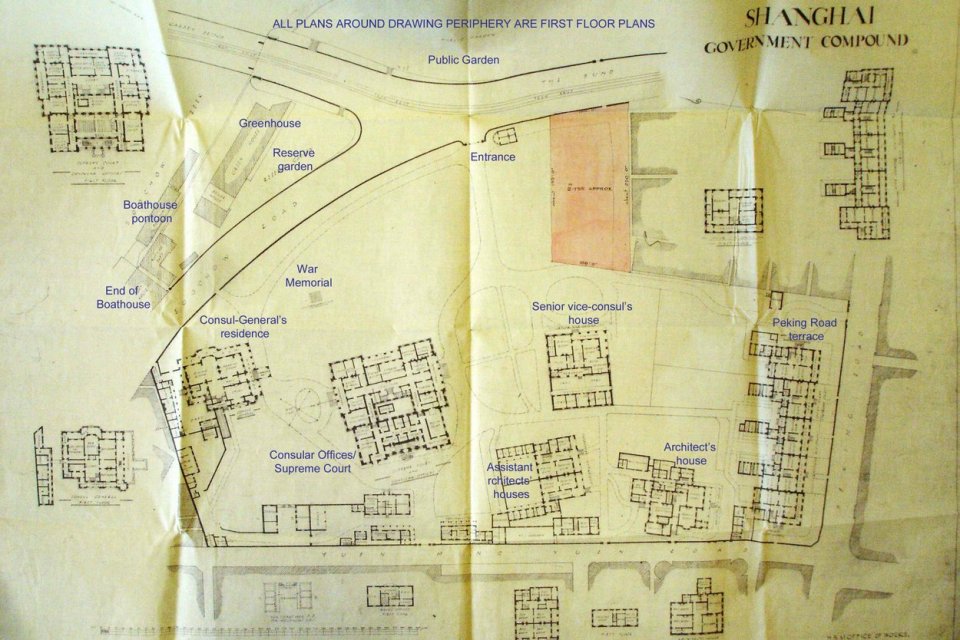 The Shanghai consulate was upgraded to a consulate-general in 1884. The compound was developed with other buildings over the next twenty years, such that by the turn of the century the accommodation in the compound, besides the two main buildings, included residences for a consul, assistant judge (the chief justice always lived off-compound), two vice-consuls, a married assistant, two bachelor assistants, chief clerk to the court, and the Office of Works surveyor/architect, as well as ancillary buildings for compradore’s quarters, sailors’ waiting room, gate lodges, and stables. A fine great lawn graced the Bund and an extremely tall flagstaff proclaimed to visiting ships where to find the British consulate.

A pair of houses was built for the 1st and 2nd assistant architects of the Office of Works in 1902. In 1913, the offices/Court building was extended on its west side by the addition of two new courts and associated offices. A building was put up for Naval Intelligence Branch in 1923. The Office of Works architect in Shanghai, William John Roberts, was tasked (or may have tasked himself) in about 1920 with producing proposals for a radical re-development of the compound, particularly with UK staff residential units, possibly to be funded by the sale of part of the compound. Roberts went through several versions in the course of the next three years, each larger and more unrealistic than the last, but there was no real pressure behind the scheme, and the Tokyo earthquake of 1923 diverted his efforts to proposals (also unexecuted) for rebuilding the Tokyo compound instead. 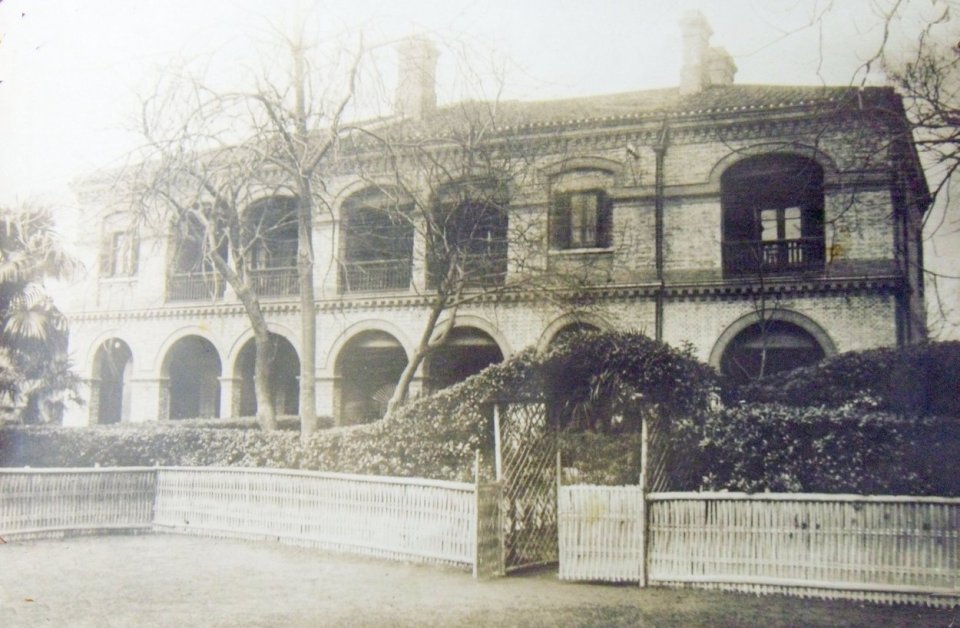 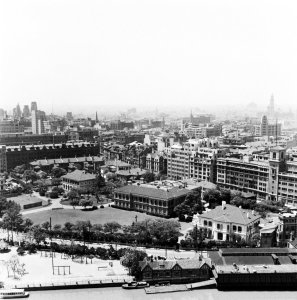 View south over the compound, with roofs of house terrace discernible on Peking Road, c.1920. 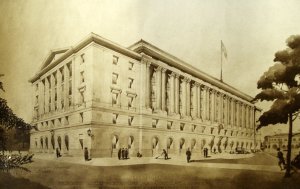