The British legation, under its minister, Sir Augustus Paget, moved to Rome (from Florence) in 1872. After a difficult search for somewhere suitable to live, he took a five year lease from Baron de Reinach, a Frankfurt banker, on the house on Via Venti (XX) Settembre, next to Michelangelo’s Porta Pia. Reinach had bought the property from the Torlonia family, hence the legation house’s occasional name as Villa Torlonia (not to be confused with another on Via Nomentana): it has also been known as the Villa Bracciano.

Three years later, Paget wrote to the foreign secretary, the earl of Derby, explaining that, although his lease did not expire for another two years, he was acting now because he knew how dreadfully difficult it would be to find another house in the event that renewal of the lease proved impossible. Although the house had significant drawbacks, the main ones being that it had no ballroom and insufficient room to house the chancery, which was leased nearby, Paget argued that these defects could be remedied by building an extension. He was anxious ‘to take time by the forelock’ as Reinach could dispose of the property at any time. Paget recommended buying the buildings and half the land for about £23,000 and spending an additional £10,000 on the necessary additions and alterations. He pointed out that the interest foregone by the government from making this capital purchase would be less than the allowance of £1,200 per annum that he received for housing the legation. He hoped that the government would despatch to Rome ‘some fit and competent person to pronounce a judgment’ upon his whole proposal.

The Treasury at first simply said that the costs were more than it was prepared to incur, but later agreed that a qualified person should visit. The Office of Works sent Charles Stephenson, a consultant surveyor. Stephenson concluded that the costs were a ‘fair and proper sum’ and that purchase was a more economic proposition than paying a rent allowance to the ambassador. The Treasury accepted this advice and the purchase deed was signed in 1877. The total cost of the acquisition of the 2.25 hectare site and the building upon it was about £43,000, comprising about £21,000 for the land and buildings, about £17,000 for the alteration and extension works that Paget built with the architect M. Rizzi immediately after its purchase; and about £5000 for furnishing the State rooms and chancery, including the furniture which Paget had bought variously from both Reinach and Maples.

Without informing London, Paget concurrently and privately leased from Reinach the half of the land that the British government had not bought, so as to preserve the whole of the magnificent garden for the use of the embassy. Five years later, and with Paget still in post, Reinach’s heirs wanted to terminate this lease so as to develop their half of the garden. After a tussle, the Treasury agreed to buy about a fifth of the heirs’ land so as to shield the residence garden from their adjacent development. That the final deal, of August 1882, failed to include the southern corner of the site was an oversight that has always been much regretted.

The house served well until the mission was withdrawn in June 1940. There was a short-lived alarm in 1888, when the Municipality of Rome was thinking of expropriating a strip of land along the Roman Wall. Staff increases after the First World War created over-crowding in the embassy and a small separate building was built at the southern end of the grounds in 1921 for offices and quarters for two secretaries. Another alarm occurred in 1931, when Mussolini’s huge road plans included a great forking of roads in the middle of the garden. In the 1930s the offices at the end of the garden were supplemented by hutments.

When the British mission returned to Rome in April 1944, towards the end of the Second World War, the settled intention was to find a new residence for the ambassador and to convert the whole of the Via XX Settembre building into offices. Accordingly, Sir Noel Charles, initially as high commissioner and then as ambassador, moved temporarily into a leased apartment in the Palazzo Sermoneta. After an abortive search for an appropriate new residence, negotiations with the Italian government were nearing conclusion in late 1946 on exchanging the Via XX Settembre building and about a third of its garden for the Villa Aldobrandini as the British residence, and building modern embassy offices on the  other two-thirds of the Via XX Settembre garden.

These discussions were brought to an abrupt end in the early hours of 31 October 1946, when the Via XX Settembre house was blown up by two suitcase bombs planted in its main entrance by, it transpired, members of Irgun, a Zionist paramilitary group. The building was looking like a total loss: the main rooms and staircase at its centre were blown to pieces: other main walls were deeply cracked and, if the building did not fall down of its own accord, most of it would soon have to be pulled down. Temporary arrangements were quickly put in hand but the Italian Security Police were soon recommending that the whole embassy should move to premises more easily protected.

The ambassador, Charles, and the deputy secretary at the (by then) Ministry of Works, Eric de Normann, met in London two weeks after the blast. They agreed that the dangerous portions of the building should be demolished forthwith, and supposed that the Italians, who had already repaired blast damage at neighbouring properties, would do this at their own expense. They also decided to take no action about seeking compensation for the time being. Enough demolition and shoring-up was then undertaken for Via XX Settembre to be re-opened to traffic in mid-December 1946. On the garden side, the worst damaged parts were demolished by the end of December. The southern end of the chancery wing was found to be fit for occupation, enabling the offices of the Treaty Enforcement Staff to remain in the building for a spell.

Charles and de Normann also satisfied themselves that leasing the former German Embassy, the Villa Wolkonsky and its grounds, would provide the best means of meeting the requirement to move out of the Via XX Settembre building altogether for as long as it took to build a new residence and offices on its ravaged site. This move was achieved in January 1947. The standing remains of the former building were finally demolished in 1952 by the contractor Castelli. By then, ambassadors’ hopes for offsetting the surrender of some land to enable Via XX Settembre to be widened with the acquisition of the south corner plot that had not been bought in 1882, had been dashed. Most of the site, henceforth referred to as the Porta Pia site, then lay vacant until the start of the construction of new embassy offices on it in 1968.

Siteplan, 1907, showing stables and orangery against the Aurelian wall, and the unpurchased site in the far corner of the garden. (North is towards bottom left.) 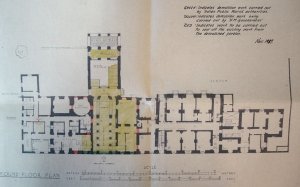 Ground floor plan, marked up in 1947 with bomb damage. 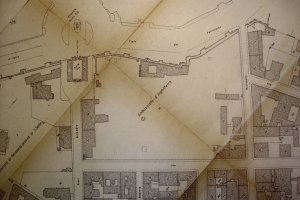 The 1931 road proposals (not implemented). 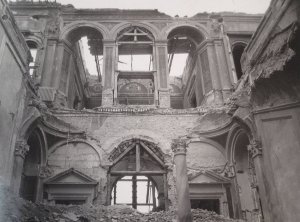 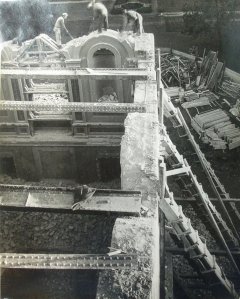 Shoring up the centre of the Via XX Settembre facade, 1946.

North-east corner of site after demolition completed, 1953, with Porta Pia visible at left.