Malawi (former Nyasaland) became independent, and a member of the Commonwealth, in 1964, and a republic in 1966. Its capital moved from Zomba to Blantyre upon independence, and to Lilongwe in 1974.

The first offices were leased in Lingadzi Building in Central Area. In 1975, Plot 40/3, of 0.8 hectares, was bought for the construction of future offices. A club house, swimming pool and tennis court were built at the edge of this site in the late 1970s. In 1986, the Foreign Office arranged a competition for the design of offices for the high commission and the British Development Division Central Africa between three local practices in 1986:  Montgomerie Oldfield Denn,  Peter J Palmer, and Norman and Dawbarn (who had a local office). It was won by Montgomerie Oldfield Denn, and their building was completed in 1991, at a cost of £1.3 million. HRH The Princess Royal planted a tree in the forecourt to commemorate completion. [? Date]

[BDDCA later moved out and their space let instead to ? World Bank]

While Zomba was the capital, the high commissioner had a pied-à-terre in Blantyre, the commercial centre, at Hornby House, [aka Buckley House?] at No. 1 Nyambadwe Extension, bought on a 99-year lease from 1961. This house became the residence when the capital moved to Blantyre in 1964. The offices in the new capital were in the Old Federal Building, at 64-65 Victoria Avenue, bought in 1963. When Lilongwe became the capital in 1974, the Old Federal Building (in part by then sublet to the British Council) and Buckley House were used by the staff left at Blantyre:  a junior staff house, called Lawson House, was also retained as a pied-à-terre for visiting staff from Lilongwe. The Post closed in 1985.

A consulate was first established in 1885, the year after the British South Africa Company applied for a charter to trade and six years before the British Protectorate of Nyasaland was established. A consulate, costing about £1,200, was built by Messrs Buchanan and Brothers, a local firm, in 1887 on one of the spurs that jut out from the south side of Mount Zomba. The designer of this rather charmingly-planned building is unknown, possibly the consul himself, Albert Hawes. The building, [somewhat extended?] became the residence of the Governor General soon after 1891, a government hostel in 1949, and is now still just recognisable as part of the Hotel Masongola.

A consulate  was left behind in Zomba when the high commission was established in Blantyre at independence in 1964. Long leases were bought on Plot 194, Mkulichi Road, for offices, 11 Malemia (former Salisbury) Road for residence,  6 Naisi Spur (formerly The Speakers House) for the deputy, and a dozen or more bungalows in the Mlungusi Estate Extension, [?Naisi Road]. 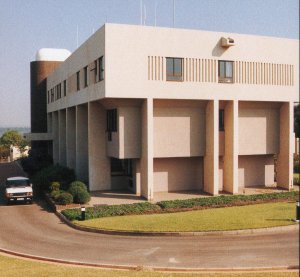